What We Know So Far About Alaska’s Innovative Election System 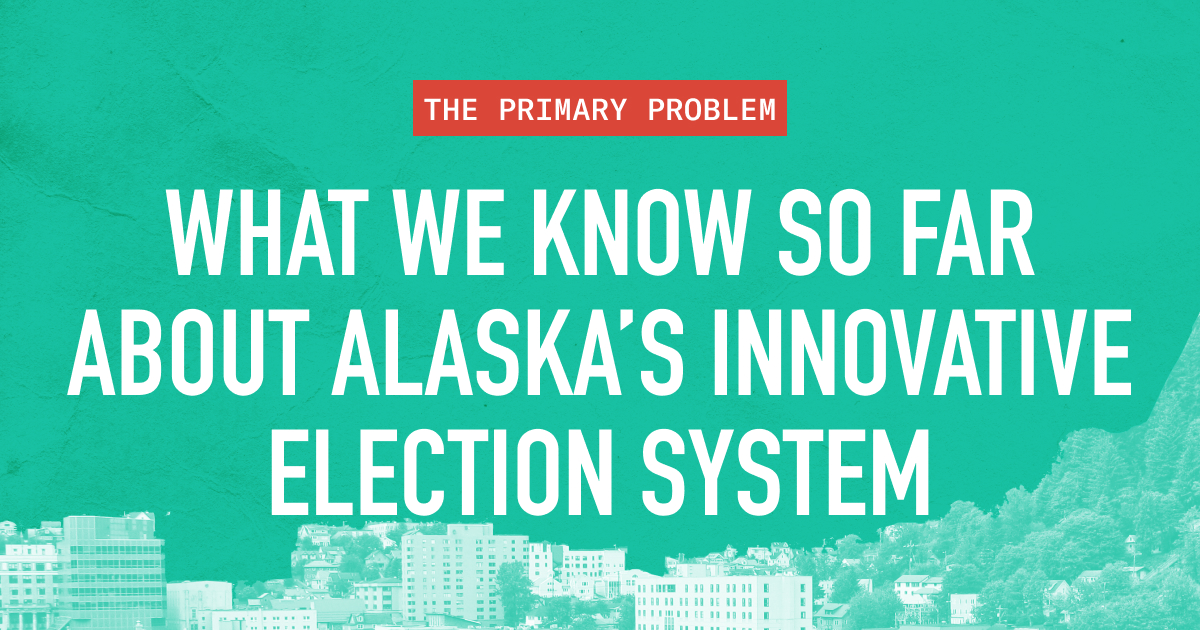 Against the backdrop of a national Primary Problem, Alaska’s election this year gave voters more representative choices, more meaningful say, and yielded more bipartisan campaigns. What’s more, Alaska voters understand and support the reformed voting process. This election week, we’re closely watching as our northernmost neighbors head to the polls under a remarkably different voting environment — will it be a model for other states?

The national spotlight is shining bright on Alaska this Election Day thanks to two high profile races to represent the state in the U.S. Senate and House. But, at Unite America we are excited for a different reason. This year, Alaska implemented an election system approved by voters in 2020. Alaska’s top-four primary and ranked choice voting (RCV) general election — the first of its kind —  was designed to give all voters more, and better, choices and change the way campaigns operate.

We may already be seeing some signs of the new system at work, including  historically large numbers of candidates running, candidates that better reflected Alaska’s political make-up, and high voter turnout in the primary. All of this was followed by general elections that were far more competitive than 2020. In addition, the party system continued to exert a healthy influence on the ballot. Finally, notable campaigns engaged in unabashed displays of bipartisanship.

More work is needed to fully understand how Alaska’s reform has changed the game for candidates and voters. There are certainly other factors at play, especially in a redistricting year, but it’s difficult to write-off the influence of Alaska’s new election system on the changes we’ve observed. We look forward to learning more after the general election and from the research community in the coming months and years.

The expanded voter pool had more candidates to choose from. A recent study published by the Sightline Institute looked at primaries from 2010 to 2022. They observed that, correlated with new reforms, “the number of candidates running in statewide races increased across the board to its highest level.” This was especially the case in the races for the U.S. House and Senate seats. This year’s primary also featured the largest percentage (31.1%) of female candidates in recent history.

Further, Sightline showed that  “every single statewide primary was competitive.”

This trend carried through to the general election. On election day, over 40% of state and federal seats featured some combination of three or more Republicans, Democrats, independents, third-party, and undeclared candidates, while only about 18% featured the usual two-candidate Republican v. Democrat matchup. This is nearly the reverse of 2020’s election in which only about 19% of the races had more than two candidates, and nearly 35% featured just a Republican and a Democrat.

At the same time, it doesn’t appear that Alaska’s party system was harmed. Parties made clear candidate endorsements, even in races that featured two candidates registered to the same party. Unite America’s analysis also indicates that the average share of Republican and Democratic registered candidates was higher in general election races this year than in 2020.

Alaska’s voters saw familiar party options throughout the election. But, their choices in the primary were broader than previous years and their general election ballot was more interesting.

There were strong examples of bipartisanship and collaborative campaigning.

Anecdotally, campaigns ran more bipartisan messaging and engaged more collaboratively than in prior elections, and certainly more so than in other elections around the country. This is not to say that negative campaigning and polarization was absent. More research will shed light on just how much campaigning has changed. Until then, candidates in the major races demonstrated collaboration in two different ways, one called for party loyalty and the other for bipartisanship:

At first, Republican campaigns were reluctant to acknowledge and adapt to RCV. But after the special election for Rep. Don Young’s (R) vacant house seat, campaigns across the state adjusted. In applicable races, candidates started advising their supporters to “Rank the Red,” meaning rank the other Republican candidate as a second choice. While this came a little late in the game to change the underlying tone of some campaigns, it was a marked departure from the voting recommendations that the election season started with.

In recent weeks, candidates have also reached across the aisle, and even across races, to support one another.

In the weeks leading up to the election, Gubernatorial candidates Bill Walker (I) and Les Gara (D) embraced a traditional and well-known strategy in RCV — second choice endorsements. The campaigns released an advertisement calling on their supporters to rank the other candidate second. Walker reflected that earning second-choice votes is “the secret sauce of ranked-choice voting.” At the same time, the Walker campaign worked to convince voters, in a civil way, that he was the only candidate that could beat Gov. Mike Dunleavy (R).

Candidates also felt safe, and perhaps saw it to their benefit, to reach out in less formal ways — a shift in the strategy that the new system encourages. Sen. Lisa Murkowski (R) and Rep. Mary Peltola (D) shared that they would be ranking each other first in their respective races for the U.S. Senate and House. Former Rep. Don Young’s (R) staff and family also endorsed Rep. Peltola.

In perhaps the most overlooked story of the election, Sarah Palin and Representative Peltola, both running to represent Alaska in Congress, spoke freely about their friendship and the close and productive working relationship they had when they were both serving in Alaska’s capital. Let that sink in. In 2022, a Republican and a Democrat in a closely contested race stood on a debate stage and talked about their friendship and mutual respect for one another as women and professionals. It does not mean that negative campaigning or polarized ideology was absent from the race, just that there was clearly space for civility as well.

Despite this confusing circumstance, voters understood RCV. According to a poll by Patinkin Research Strategies, 85% of voters overall said that RCV was “simple,” including at least 80% of respondents across Alaska Native, Black, Latino, and Asian/Hawaiian voters. 62% of Alaskans also supported the state’s new, open, primary system.

Conducting any election in Alaska is always an administrative feat due to its unique geographic landscape and rich demographic diversity. Election administrators truly rose to the occasion. Not only did they administer the special election to their usual high standards, they educated the public with TV and Radio PSAs, delivered mail to every household, and created compelling voter education videos online.

The general election has also gone smoothly so far. But, with many Alaskans voting absentee, including those overseas, the Division of Elections is asking the public to be patient. The new election system makes each general election vote cast more important. So, it’s critical that those absentee ballots are counted, which won’t happen until after the mandatory 15-day grace period (Nov. 23). Waiting is not something many of us are good at in 2022. But, then again neither is friendly politics. Alaska is truly leading the way.