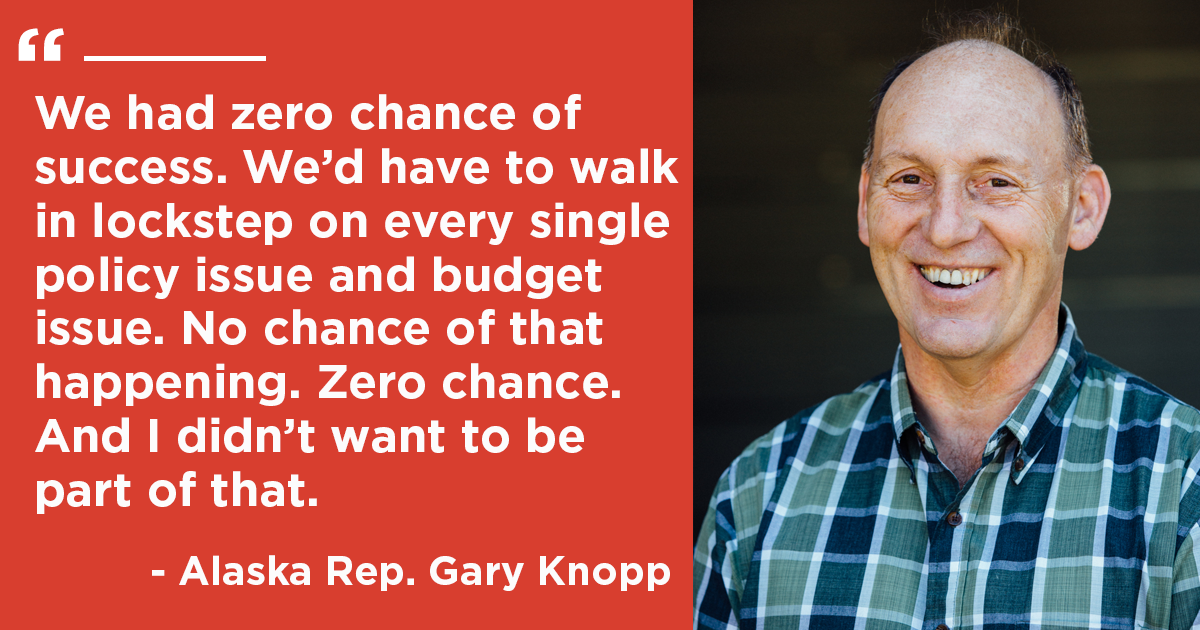 Representative Knopp was one of the architects of the multi-partisan governing coalition that was established in 2019, following the Republican’s narrow majority in the midterms. With 23 seats of a 40-member house chamber, governing was going to be difficult, and demanded absolute alignment from Republican members. No deviation from the party line would be allowed if they were going to get legislation passed.

Knopp, along with two fellow Republicans, refused to join their party’s caucus, instead believing that having a majority governing coalition comprised of Republicans, Democrats, and independents was more important.

Representative Knopp and his fellow rebels held out for 31 days until at last a multi-partisan governing coalition emerged, made up of not only Republicans and Democrats, but independents as well. He thought about governing differently, and in doing so,  ensured that all Alaskan voices would be heard during the legislative session.

This week’s Three Things seeks to honor the legacy of Representative Knopp, who epitomized the mantra of “Country Over Party.”

He put service to his constituents ahead of partisan interest or political aspirations.

He represents the best of our nation’s leaders. Here are three ways to honor his memory:

Please, take a moment to read about the legacy of Gary Knopp, an Alaskan leader and an example for our nation.

Watch this video about Knopp, his efforts, and his philosophy on governance.

Read about his life, about his rebellion, and about what you all had to say in response.

One of the biggest reasons that polling locations across the country are shutting down this election cycle is because of a serious lack of poll workers willing to volunteer. They have reason -- the average age of poll workers in 2016 was over 61 years, and in the midst of a pandemic, those individuals are safer staying at home.

Our nation needs healthy young people to do their part and sign up to be poll workers. To keep our republic, we as regular citizens have to step up to do our part. Learn more about why you should volunteer this election cycle, and how you can sign up to do so.

Don’t listen to the fear-mongering; this year’s election will be secure. Unit America executive director Nick Troiano sat down to give the Upside to the election news: not only is safe, secure voting possible this election, but it’s going to happen.

Once again, our voting comes down to us as voters; Americans need to do their part, requesting absentee ballots early (if required in their state) and returning them early. We can’t procrastinate this election cycle. Holding an election during a pandemic is already hard enough. Don’t make your county clerk’s job harder.

Unite America will continue to honor the legacy of Gary Knopp in our work. We’ll remember him as a courageous leader who put his constituents first to deliver solutions. Thank you, Representative.