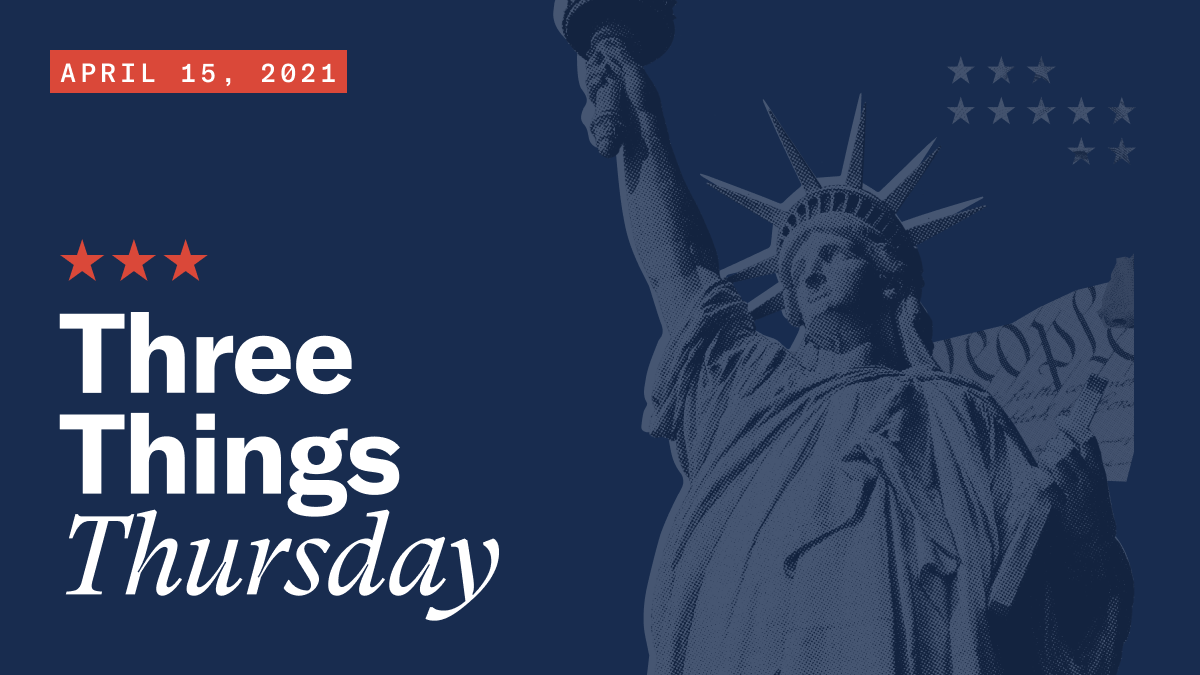 At the same time, Republican representatives Adam Kinzinger (IL-15) and Liz Cheney (WY) both earned headlines for their first quarter fundraising numbers; they each raised over a million dollars, as they prepare their war chests to defend their seats in hotly contested primaries from Trump-backed challengers.

All of these representatives serve safe districts — where whoever wins the primary is essentially guaranteed to win the general election. Partisan primaries have an outsized influence in our political system. Who wins and loses these elections ends up impacting all of us — whether or not you live in the district.

In case you don’t regularly read our Three Things emails (you should!) allow us to introduce you to the Primary Problem: the dynamic created by partisan primaries which allow a small percentage of voters to have an outsized influence on our political system.

For The Hill, political strategist Jared Alper breaks down the Primary Problem, as well as what can be done to solve it. He writes: “Breaking the doom-loop of polarization between the campaign trail and Congress is possible only by accepting that the root cause of dysfunction in our democratic republic is not whom we send to Washington but how we elect them to serve us in government. And there is a solution: embracing nonpartisan primary elections.”

Unite America Executive Director Nick Troiano was up bright and early Saturday morning, talking to CSPAN’s Washington Journal about his piece published in the Atlantic earlier this month, Party Primaries Must Go.

If you’re wondering “why nonpartisan primaries?” “what will happen to the parties?” or “what does a voters first election system look like?” Nick answers all of these questions and more during his 45 minute sit-down (whew!).

Check it out here.

Yes, we’re going full Primary Problem-themed in this week’s Three Things, because yes, we do think it’s that important. You know who else thinks it’s important? The good people of New Mexico. This week, opinion pieces in both the Albuquerque Journal and Santa Fe New Mexican write about what the Primary Problem looks like for New Mexicans.

In the New Mexican, author and independent voter Jarratt Applewhite testifies to the disenfranchising nature of closed primaries for independent voters. “Like me,” Applewhite writes, “over 300,000 New Mexico voters choose not to affiliate with a major party even though doing so denies us access to the primary ballot... Our taxes pay for these private elections just like those of party members. Most people recognize that this is inherently unfair, and many also realize it is not right to ask us to associate with a major party just to have the right to vote.”

In the Journal, former New Mexico State Representative Bob Perls makes an appeal for New Mexico voters to join the fight for open primaries in the state. He argues, “Political parties should be players in the political marketplace, not the rule setters, and creating nonpartisan primaries puts the voters in charge, not the parties. The parties can and do still endorse their candidates, but they don’t control who can vote in a public election as they do today in New Mexico.”

We are excited to see more people around the nation calling for opening primaries and other policies that put voters first. Check out both the articles!