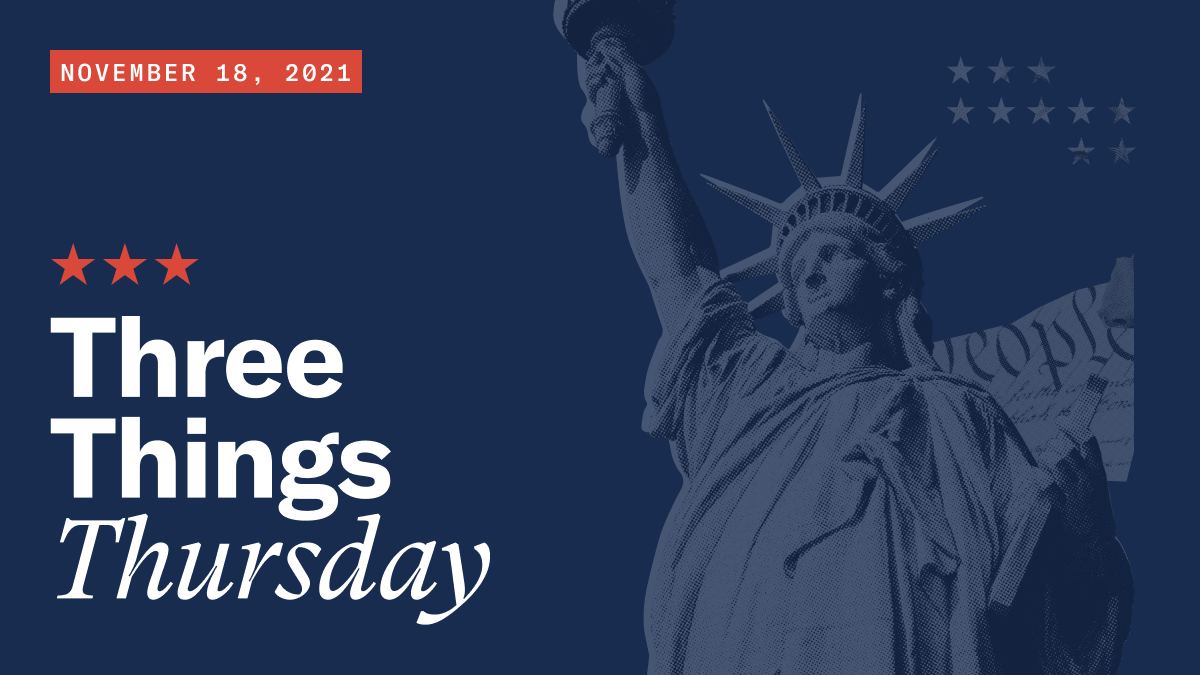 This week, I’m grateful for bipartisan infrastructure bills and independent redistricting commissions. I’m grateful for reformers across the country pushing reforms to put voters first like ranked choice voting and nonpartisan primaries. I’m grateful for you all, who take time each week to engage with this newsletter and the thoughts, issues, and articles presented in it.

(Yes, our Thanksgiving Three Things is one week early, but we’re taking next week off!)

The attack at the capitol on January 6th was a horrifying attempted coup staged right in front of our eyes. But it didn’t end there. The attack against our democracy has continued over the last year — and will continue well into 2024. This week, the Guardian takes a deep dive into the ongoing attempt to undermine election results, through the nomination and election of Big Lie candidates and Trump loyalists.

It’s unlike anything we’ve ever seen in this country: more than loyalty to party over country, it’s loyalty to an individual man over everything. If Americans fall asleep at the wheel and allow conspiracy theorists to win everything from County Clerk races to Secretary of State offices, there is a very real possibility that we will watch our democracy crumble from the inside. Read the full piece here.

One of the many reasons we support ranked choice voting is because it gives voters more power on the ballot to make their voices heard. In a special election in Florida, the need for ranked choice voting was apparent after an 11-way primary was decided by just five votes, the recount of which was determined just this week. Five votes is a crazy margin, and the winner — Sheila Cherfilus-McCormick — ended up winning just about 24% of votes cast. Without a clear mandate, Cherfilus-McCormick is all but guaranteed to win the election in the heavily Democratic district.

As political strategist Marvin Randolph points out, under the current system, the remaining 76% of voters are left silenced. With ranked choice voting, these voters — the majority of voters — would get their second, third, fourth choices counted, helping to ensure that the winner of the election is the one who is actually supported by the majority of voters. Read his full piece here.

This week, the New York Times came out with an impressive deep dive into the state of redistricting across the country. The upshot: it’s not going great. Legislators have their hands in the proverbial cookie jar, drawing maps that benefit their own reelection and their party more than voters.

It’s not a pretty sight. Before the election even happens — before the maps are even fully adopted — we can predict with a high degree of accuracy which party is going to have control of, not only the House of Representatives, but of state legislatures across the country. To end the scourge of gerrymandering, we have to make sure that every vote in every election matters, and make our voices heard.