Major Reform is on the Ballot in 2020 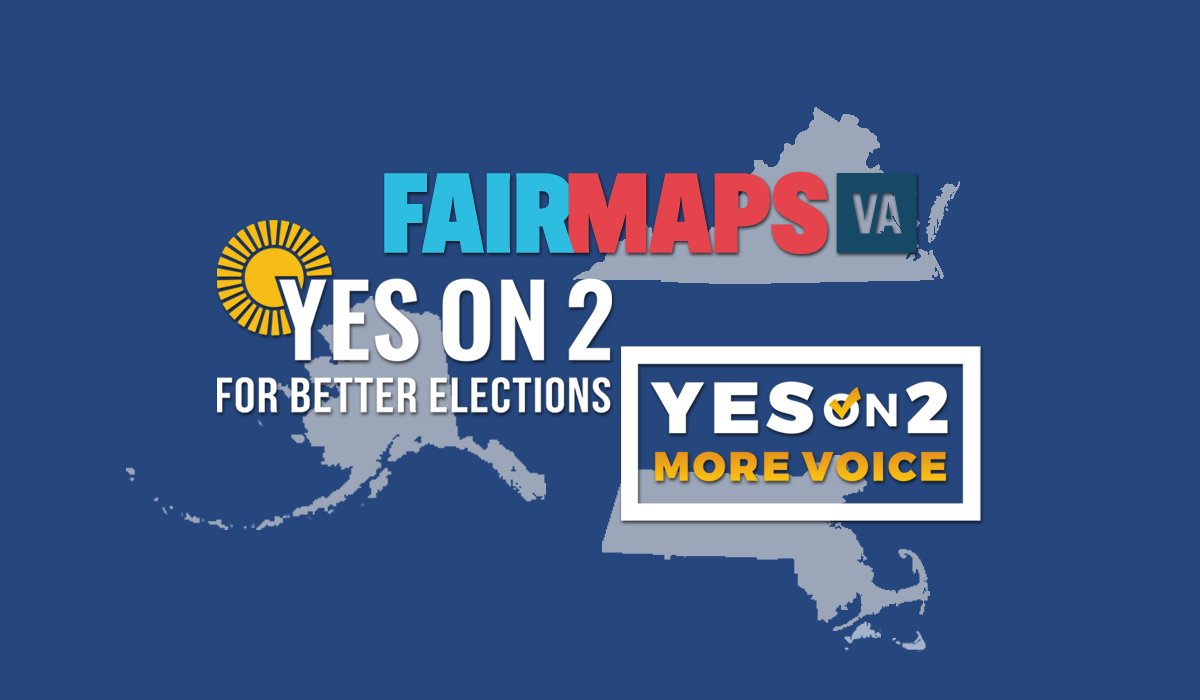 As our country continues to spiral into a doom loop of division and dysfunction, there are three critical 2020 opportunities to support long-term structural reforms that have the ability to address root cause problems in our democracy.

Campaigns in Alaska, Virginia, and Massachusetts offer an inspirational vision for how we fix our politics with tangible policy solutions to promote competition, participation, and accountability in the system.

If passed this November, we could see a major expansion of ranked choice voting, a rejection of partisan gerrymandering in a key swing state, and the first use of “Final-Four Voting.”

These are critical opportunities not only to enact reforms that will improve incentives for state and congressional leaders, but also because they can help build momentum for reform nationally going into the next several election cycles.

‍Voters in The Last Frontier could pave the way for electoral innovation nationwide. The first “Final-Four Voting” system in the country could be approved, powerfully combining nonpartisan primaries and ranked choice voting. If passed, the reform would eliminate barriers for for independent and third party voters while allowing all elected leaders to govern in a more pragmatic way without fear of being “primaried;” the policy is especially important in Alaska where 58% of voters are registered unaffiliated, there is a history of competitive three-way contests, and a bipartisan coalition governs in the state house.

‍Alaskans for Better Elections has been organizing for the last two years to support this ballot initiative. The campaign is led by a 21 person steering committee, endorsed by a coalition of 11 former or current members of the Alaska legislature, and supported by a strong local coalition of good government, civic, and cultural institutions and organizations.

‍After near unanimous support for redistricting reform in 2019, most Democratic lawmakers in Virginia opposed the same constitutional amendment to end gerrymandering in 2020 — coincidentally, after they had taken control of the legislature and the ability to draw lines in a partisan way. Winning in November proves we can beat overt partisanship, no matter which side of the aisle it comes from. If passed, the reform would be the most substantial anti-gerrymandering measure ever adopted in a state where legislator buy-in on congressional maps is required.

A study by the nonpartisan Schwarzenegger Institute found Virginia's state legislative maps to be the most gerrymandered in the country.  Reform is critical now with the 2021 redistricting cycle set to begin next year after the completion of the census.

A redistricting commission composed of eight legislators and eight citizens to draw all state and federal district boundaries.

‍FairMapsVA is chaired by Bobby Vassar (D) and Wyatt Durette (R) and led by a diverse board. Their 100 member leadership council includes former state representatives, mayors, business leaders, and academics from across the Commonwealth.

‍Massachusetts is consistently ranked as one of the least electorally competitive and demographically representative states in the country, things that a 2020 ballot measure to adopt ranked choice voting could help fix. If passed in such a politically significant state, the measure could also serve as a catalytic tipping point for the growing movement of activists, thought leaders, elected officials, and philanthropists committed to advancing ranked choice voting. Massachusetts would join Maine as the second state with statewide use of ranked choice voting.

Ranked choice voting for all state and federal primary and general elections, except for presidential contests.

Voter Choice Massachusetts has been organizing volunteers for over four years and has built a powerful grassroots movement of more than 30,000 supporters. Supporters of the campaign include a diverse advisory board of civic, business, and community leaders.

More than $15 million has been mobilized to support these campaigns, hundreds of thousands of supporters have been engaged, and strong campaign teams have been built. Now, it’s time to earn the millions of votes required to pass transformative measures primed to change electoral incentives and alter the course of the voters first movement.