Finding More in Common during Coronavirus 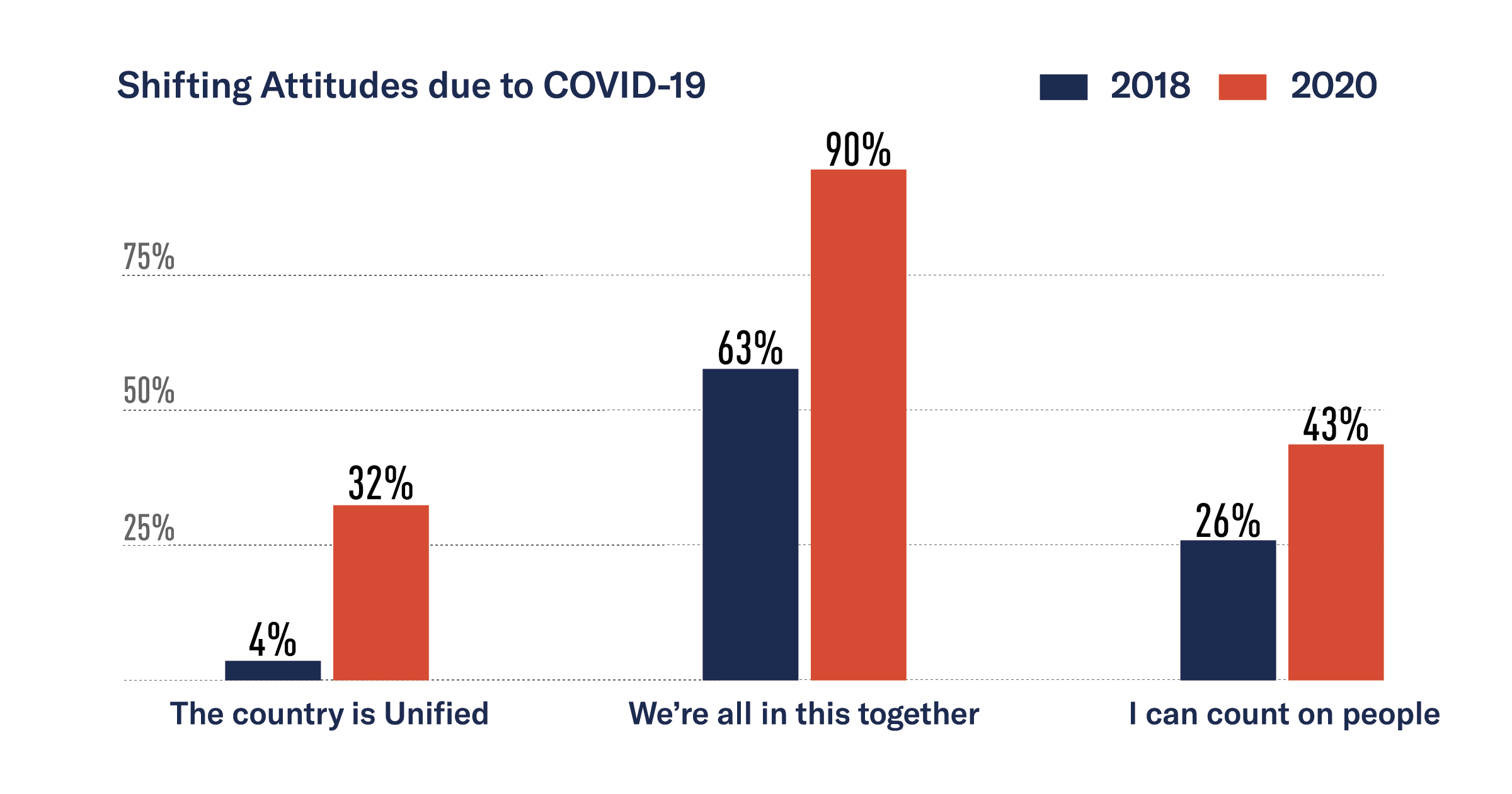 Polarization and the Pandemic

A recent survey of 2,000 Americans by More in Common and YouGov analyzed how COVID-19 is impacting Americans’ perceptions of unity, division, gratitude, and trust, as well as how we should respond to the pandemic.

While fear of the pandemic is widespread, there remains a perception of increasing unity across the electorate. Amongst a number of key indicators, compared to two years ago, many more  Americans feel unified, that they can count on one another, and that we’re all in this together.

However, voters on the ideological wings of each party have seem to have vastly different perceptions of the pandemic. Further, voters from the two parties have vastly varying views on what the right public health and economic policy responses to the crises should be.

The survey included polling 1,000 respondents from a previous More in Common survey that identified seven tribes in the American political landscape, ranging from devoted conservatives to progressive activists. While there exists some differences in attitudes about the pandemic across party lines, the most pronounced distinctions can be seen by comparing the ideological wings of each party. Indicators that the pandemic has magnified our polarization include:

Perhaps paradoxically, as the crisis has created a different perception of the world across partisan lines, the number of Americans indicating a sense of unity is up. Across three questions tested both in 2018 and 2020, More in Common finds:

Can our politics hold?

While a clear majority of Americans view doctors, nurses, and hospital staff (84%) as heroes, along with police, firefighters, and emergency medical teams (71%), local politicians (23%) and national politicians (7%) are held in significantly lower regard. To improve their standing, policymakers will need to prove effective governors in a time of crisis.

As Ashley Quarcoo and Rachel Kleinfeld wrote for the Carnegie Endowment of International Peace, severe political polarization has already been tearing apart democracies, including the United States. Democracies are under further threat from the pandemic, which also offers an opportunity for elected leaders from both sides to rally together against a common enemy and unify the country.

They offer two key solutions to unifying the country: voters must reward effective governance and elected leaders must compromise. So far, indicators suggest we’re doing okay. Approval ratings for governors are up, and Congress has passed three major stimulus packages with near unanimous support. Yet, there are wide discrepancies in approval ratings of the administration across party lines, and the fourth stimulus bill promises to be the most partisan fight yet.

As the country gears up for one of the most divisive presidential elections in recent history, there remains a unique opportunity for elected leaders to rise above the fray, find common ground, and put people over party.