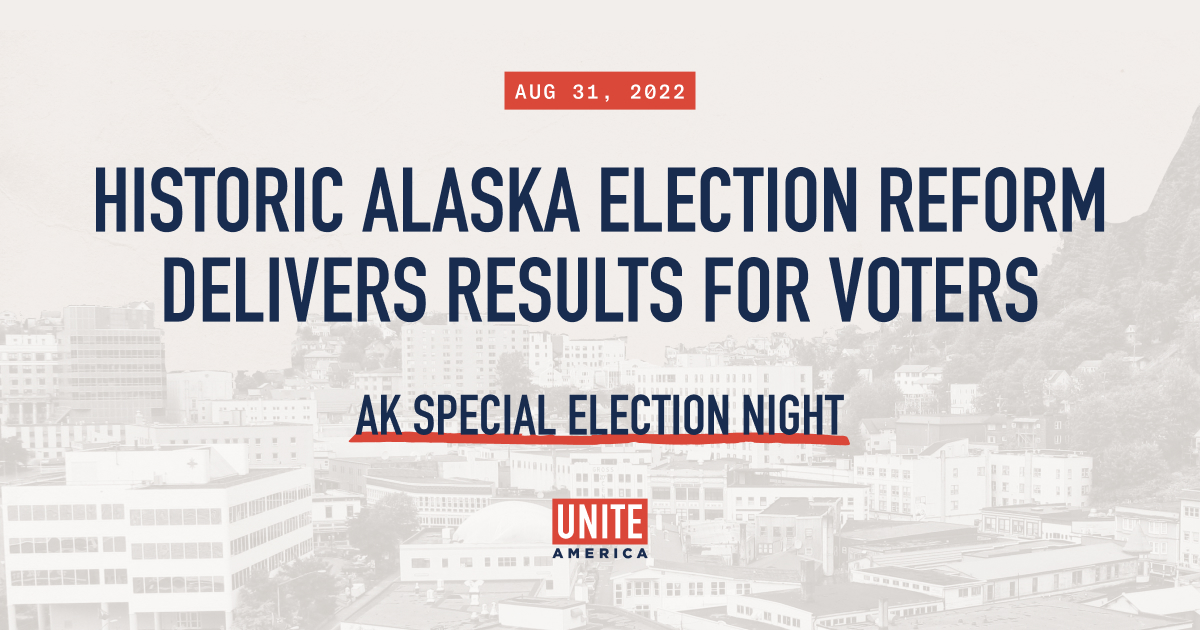 They call Alaska “The Last Frontier.” Now it’s at the very forefront of the American story: government “of, by, and for” the people — thanks to a new election model that will fully deliver it.

Just try this on for size (there’s more where it came from): 62 state and federal seats were up for election in the August primary. And nearly all of them will give voters a choice other than the typical Republican vs. Democratic matchup — only 7 out of the 62 fit that bill.

What that means is this: Alaska’s top-four primary + ranked choice general election reform — the first of its kind — broadened the representation of voters in a way that no election has in modern history. It provided voters with choices that better matched their preferences.

The results of the special House election announced on Wednesday night mark a proof of concept for policies that allow all eligible voters to participate, regardless of party, right from the primary stage. It’s the biggest step forward in the effort to solve the Primary Problem, which is distorting representation, fueling dysfunction, and disenfranchising voters across the country.

“From now on, the winners of Alaska elections are accountable to all voters, instead of a very few. And that means better representation. In the long run, it’s also going to mean better results.

As for the winner of this one election, said Troiano: “Ultimately, the new system produced the candidate with support from the majority of voters — and when they get to Washington, they’ll know their re-election fate depends on representing all of their constituents, not just primary voters.”

Tonight’s results are the culmination of the most consequential reform to put voters first in the country: top-four nonpartisan primaries + instant runoff general elections.

Prior to Alaska voters’ passage of Ballot Measure 2 in 2020, most voters were shut out. Only registered Republicans could vote in Republican primaries, and only Democrats, with exceptions at the party’s discretion, could vote in Democratic primaries. This means that more than 60 percent of Alaskan voters — who are registered as undeclared, nonpartisan, or with a third party — were often barred from consequential elections. (August registration data here.)

In 2020, Alaskans voted for a better system to solve this Primary Problem. Local reform-minded advocates from across the political spectrum advocated for Ballot Measure 2 to eliminate partisan primaries — and a majority of voters agreed. The effort was led by Alaskans for Better Elections and endorsed by a bipartisan group of sitting and former legislators, the League of Women Voters, and several Alaska Native organizations, among other Alaskans.

Alaska-style reform is well on its way to becoming normalized across the country. Several jurisdictions use parts of it. California and Washington use nonpartisan primaries (”top-two” instead of “top-four”); Louisiana doesn’t have a primary election at all; and Nebraska uses nonpartisan primaries for state legislature. Additionally, 55 jurisdictions — including Maine, New York City and other major metropolitan areas, and now Alaska — use ranked choice voting. Alaska is the first state to pair the two ideas, to provide voters with the better choices and representation that they deserve.

Nevadans will vote on a “top-five” model, similar to Alaska’s top-four, on their November ballot, also known as Final-Five Voting. Campaigns to solve the Primary Problem with nonpartisan primaries that put voters first are beginning to materialize in more than a dozen additional states — including in Wisconsin, where legislators from both parties have introduced legislation to send their federal delegation to Washington with the right incentives.