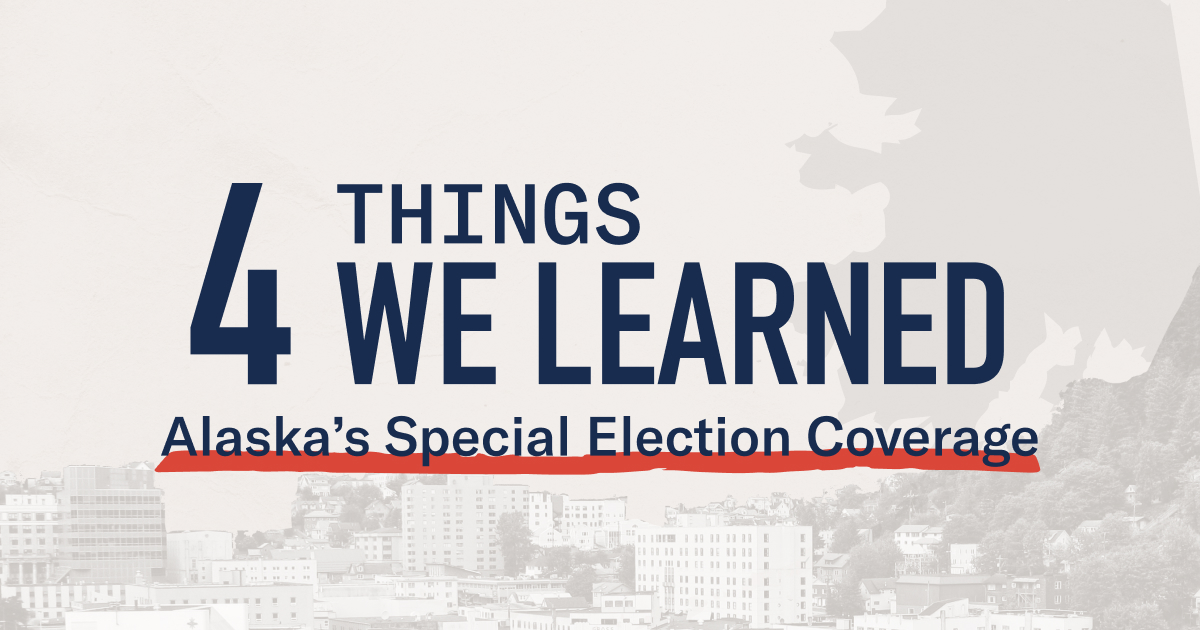 The topline: Alaska’s first use of its newly reformed election model nears conclusion  as the state certifies final results. By all measures the reform delivered on promises — competition increased, voter influence was maximized, and representative outcomes ensued — all made possible by successful voter education and election administration.
‍

Though outcomes of almost all elections are judged by who wins and loses, it’s important to consider the ways in which electoral reform changes how we elect leaders — from the perspectives of voters, candidates, and election administrators — and the incentives those leaders face under new electoral systems.

During Alaska’s August 16th special ranked choice voting election, voters had the opportunity to rank up to four candidates in order of preference to fill the state’s at-large U.S. House seat vacancy left by the late Rep. Don Young (R). On the flip slide of their ballot, races for state legislature, governor, U.S. Senate, and U.S. House were held under a nonpartisan primary — the top four candidates will advance to the November RCV general election.

The results of the special election were tabulated August 31st, cementing the outcome of the vacancy and providing a truly historic glance at the first top-four nonpartisan primary in U.S. History.

Here are four key takeaways about what we know:

1. More voters had true influence in the outcomes.

Primaries under the state’s previous system were often limited to registered partisans, barring over 60% of the voter population that isn’t registered with one of the two major parties. Primary turnout reached the third-highest in state history (over 32% of registered voters), and pales in comparison to the current 18% average turnout in partisan primaries nationally.

2. Voters received information about how to rank their ballots, engaged with the new ballot, and found it simple to complete.

‍A new poll from Patinkin Research Strategies done for Alaskans for Better Elections found that 95% of voters received information on how to complete their RCV ballot; 85% of Alaska voters across demographic lines said it was “simple” to fill out their ranked choice ballot. A third of the respondents said they ranked only one candidate, their top choice (it’s permitted, and their votes count just the same). Of those voters, 75% said they ranked just one because it was the only candidate they liked, indicating they understood how the ballot worked just fine.

Conducting any election in Alaska is always an administrative feat due to its unique geographic landscape and rich demographic diversity. The delay in results reporting is not due to the nature of the reform, but rather due to a statutory 15-day absentee ballot return period. Mail is often delayed throughout rural communities and a large population of voters return ballots from the military or overseas. Election administrators rose to occasion to do so under new rules, all while filling a vacancy on an escalated timetable. Not only did they administer the election without a hitch, they educated the public with TV and Radio PSAs, mail delivered to every household, and compelling voter education videos online.

4. Come November, voters won’t be left voting for the lesser of two evils, introducing real competition and choice to the general election.

Critically, the reform broadens representation: 62 state and federal seats were up for election in the August primary, and half of them will feature some combination of three or more Republicans, Democrats, independents, third-party, and undeclared candidates in November. Only seven contests will include the typical R vs. D matchup, giving voters more choice than the usual two-party binary.

After today’s tabulation of results, Democrat Mary Peltola is the winner of the special election vacancy for the U.S. House. Peltola will assume office in September when Congress reconvenes, and will become the state’s first woman and Congress’s first-ever Alaska Native to hold the post.

Notably, Peltola campaigned on rising beyond partisanship: “I’ve really been an advocate of thinking beyond partisanship and seeing people beyond party lines,” she said in an interview. “I think Alaskans are very receptive to that. We often vote for the person and not the party.” Peltola also encouraged Palin and Begich supporters to rank her second throughout her campaign.

Regardless of winners and losers, there’s much to celebrate about the system. Too often, partisan primaries yield low-turnout and a lack of choice beyond the status quo and it’s created a national primary problem: to date in partisan primaries across the U.S., just 8% of voters nationwide have effectively elected 82% of Congress.

But Alaska is on the precipice of something refreshing: a primary where the outcome is not predictable, predetermined by parties, or voted into office by a select few party-faithfuls — and a general election that’s worth participating in.

We’ve said it before and we’ll say it again. North, to the Future!

As is true of all elections, results are not final until certified on September 2nd.