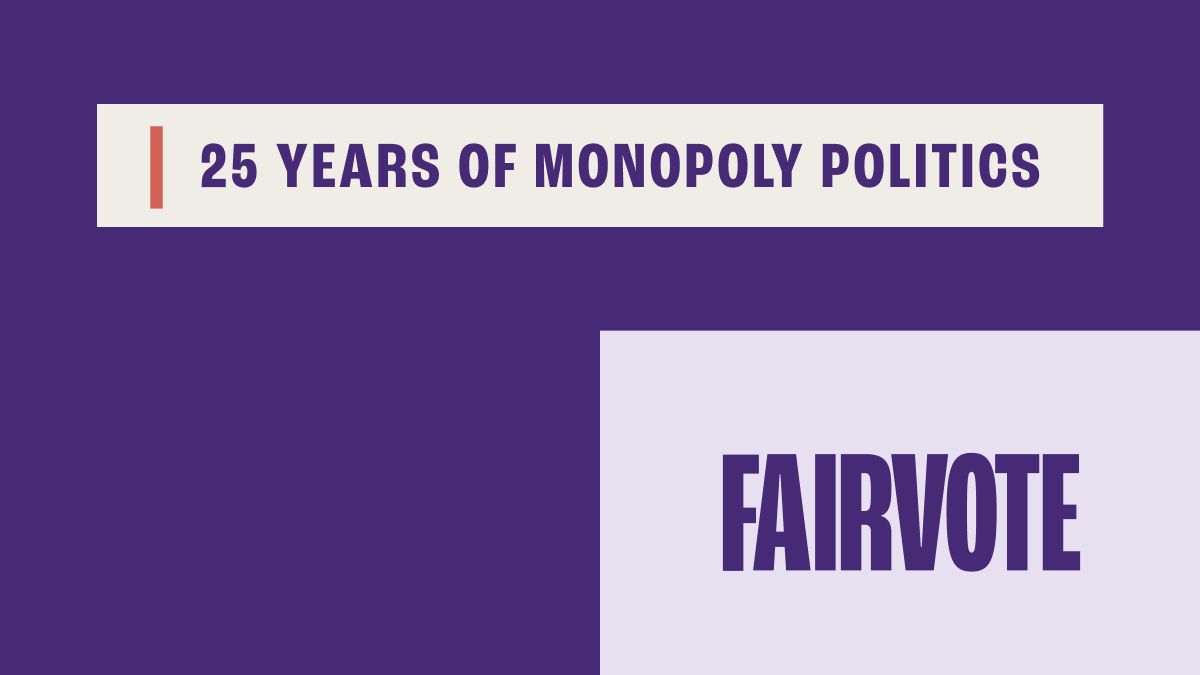 ‍The topline:  FairVote’s biennial Monopoly Politics project is conducted before each U.S. House election to predict election outcomes. They’ve done so over 99% accurately for five of the last six election cycles, and 2022 analysis promises to be no different: we’ll know outcomes in a supermajority of congressional races before a single ballot is cast in November.

As the midterm primary season nears a close in a few short weeks, much of the election buzz will shift with anticipation toward the November general. But a new biennial report from FairVote — which is celebrating 25 years of accurate election prediction — suggests the outcome in 80% of House elections has already been decided, determined solely on past voting patterns and the structure of our electoral system. (See an interactive data visualization here.)

Following the 2021 redistricting cycle, the biggest shift in congressional maps was clear decline of competitive seats. The number of seats that either Joe Biden or Donald Trump won by less than five percentage points dropped from 51 seats in 2020 to just 33 in 2022 — a decrease in 35 seats.

Partisan gerrymandering and voters’ geographic self-sorting along partisan lines plays a role as the surest culprit of non-competitive, single-winner district maps, but the report also considers open seats and incumbency advantage. Only 13% of congressional seats (or 56 seats) have vacancies: while some are projected to be competitive, many vacant seats still have high-confidence projections for the dominant party in the district. The incumbency advantage, while still important according to FairVote, plays less of a role in predicting election outcomes (in fact it’s been on decline): candidates’ ability to mirror the partisan ideology of their primary voters matters far more.

Additionally, crossover representatives — or House members whose district voted for a different party for president than for Congress — have steadily decreased as politics continue to nationalize. In 1996 there were 115 U.S. Representatives that won in crossover districts, compared to 2020 when there were just 16.

These factors combine for a dangerous reality: a supermajority of U.S. House seats are easy to predict, and outcomes are decided in party primaries by a select few partisan faithfuls (cc: The Primary Problem).

“Nominees from the dominant party in hyper-partisan districts are essentially guaranteed to win the general election, and therefore need not appeal to the wishes of the general electorate. The only test they need to pass is with primary voters.”   — Monopoly Politics 2022 Report

The consequences of reliably red and blue districts have major ramifications for not only the (predictably low turnout) campaign season, but also for representation in Congress. Some susceptible flaws outlined in the report include:

FairVote’s solution to the “chronic lack of competition, voters’ inability to hold elected officials accountable, a lack of meaningful choice for most districts, and a lack of diversity,” lies in the Fair Representation Act (FRA).

The FRA establishes multi-winner congressional districts, whereby members are elected from each district with proportional ranked choice voting. The system has many merits, not the least of which is that representatives would be accountable to general election voters — not just their primary base — and nearly all voters would participate in a meaningfully competitive election with greater choice on their ballot.

Let’s celebrate 25 years of accurate election prediction. But may the next 25 be far less easy to predict in the name of voter choice, electoral accountability, and representative governance.