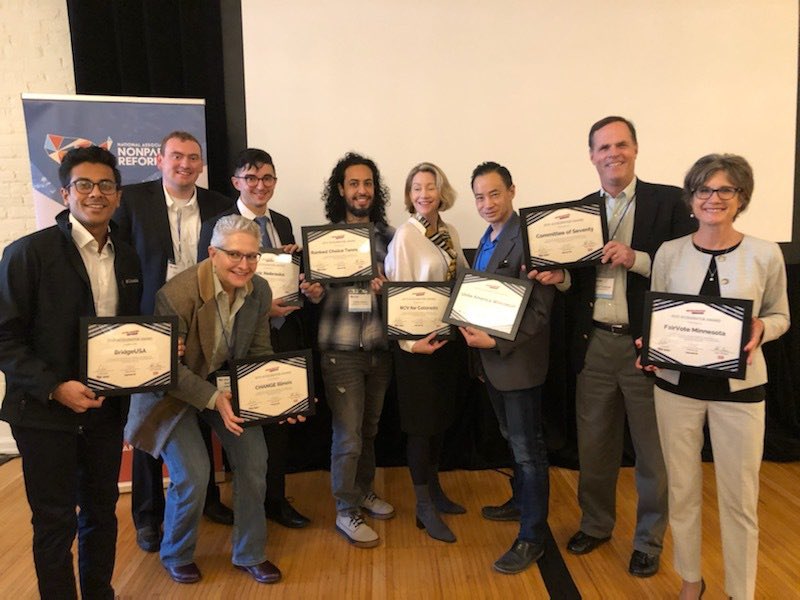 Today we announced the winners of our first ever accelerator award grants in partnership with RepresentUs.

The 13 grant recipients, selected from more than 115 applicants, represent a diverse array of  projects around the country that aim to put voters first by increasing participation, competition, and accountability in our political system.

“With more than 20 reform victories in 2018, the movement to put voters first is gaining momentum,” said Tyler Fisher, Deputy Director of Unite America. “We are proud to work with our partners to provide support to the growing number of activists and organizations who are taking a stand against political corruption and dysfunction.”

The Accelerator Awards were presented in partnership with RepresentUs at the annual summit of the National Association of Nonpartisan Reformers in Denver, CO. The grants, which range in amounts from $10,000 – $25,000, were funded by the Unite America Fund, including support from Arnold Ventures. Grantees will also be eligible to receive critical in-kind campaign support from RepresentUs’ Campaign Accelerator program.

Ending partisan gerrymandering across America – in both red and blue states ahead of 2021 redistricting. These organizations are working to institute independent redistricting commissions that allow voters, not politicians, to draw their legislative districts.

Giving voters more power in elections. These organizations are working to institute open primaries or Ranked Choice Voting, which gives more voice and more choice to voters in elections.

Getting citizens more involved in elections. These organizations are working to institute “vote by mail” solutions that makes it easier and more secure for voters to cast informed ballots in elections, or are working to activate young people to work in the reform movement.

More details on these projects can be found below.

Grantees were selected by the Accelerator Awards’ review committee, whose members included: